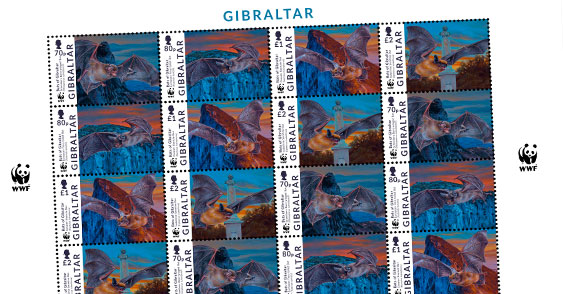 In collaboration with the World Wild Life Fund, Gibraltar is proud to issue this set of four stamps depicting the following bats;

The Greater noctule bat is Europe’s largest and rarest bat. It is primarily an arboreal species with the largest known colonies in Iberia being the nearby Los Alcornocales Natural Park with smaller breeding colonies in an urban park in Seville and a zoo in Jerez de la Frontera. It is known for supplementing its insectivorous diet with small passerine birds which they prey on at great heights during migration and is therefore only usually seen while emerging from their roosts or drinking, though this is also difficult seeing as they normally emerge once night has fallen. Noctule bats of the genus Nyctalus were known to occur in Gibraltar since 1967 with identification down to species level having been confirmed in 2015.

The European free-tailed bat is Europe’s second largest bat. Though abundant in numbers, it is a notoriously difficult species to study due to their roosting and feeding habits. Naturally a crevice dweller, they do not congregate in large colonies and have countless natural roosting spots available to them in Gibraltar. They are also high-fliers that rarely come down to drink as they get most of their moisture from the large airborne insects they consume.

The Isabelline serotine bat was first recorded in Gibraltar in 2013. The species has only recently been recognised as a full valid species following molecular analyses using mitochondrial DNA and nuclear markers, separating it from the Serotine bat (Eptesicus serotinus). Thus, little is known about the ecology of this species in its own right. Its range is limited to the warmer southern half of the Iberian Peninsula and the Mediterranean fringe along the African coast from Morocco to Libya. It is considered a crevice dweller that has adapted to roosting in buildings in urban environments, as is the case in Gibraltar.

The Schreibers’ bat is a cave-dwelling species long established in Gibraltar with 50,000-year-old fossils having been discovered in the archaeological deposits of Gorham’s Cave. It was once in abundance in Gibraltar and most of Europe but populations seem to have suffered massive declines since the 1970s with local populations crashing by 97.86%. This trend is palpable throughout the continent with Spain and Portugal reporting mass mortalities; similar reports have come from France too. Though the cause in most of these cases appears to be epidemiological, pesticides, through trophic poisoning is another major cause of mass mortality in this species. Another more localised main contributing factor to the decline of this species over the past four to fi ve decades has been due to direct human disturbance inside caves where colonies of thousands used to roost.

We would like to give a special thank you and mention to Gib-Bats and the Gibraltar Museum for their involvement on this project. They have truly been instrumental to make this stamp issue a reality.