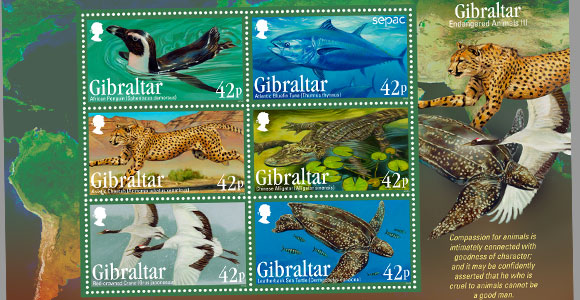 The Asiatic Cheetah (Acinonyx jubatus venaticus) is a critically endangered subspecies of the cheetah found today only in Iran, with some occasional sightings in Balochistan, Pakistan. It lives mainly in Iran’s vast central desert in fragmented pieces of remaining suitable habitat. Although once common, the animal was driven to extinction in other parts of Southwest Asia from Arabia to India including Afghanistan. As of 2013, only 20 cheetahs were identified in Iran but some areas remained to be surveyed; the total population may be 50 to 100. The Asiatic cheetah separated from its African relative between 32,000 and 67,000 years ago. Along with the Eurasian lynx and the Persian leopard, it is one of three remaining species of large cats in Iran today.

The African Penguin (Spheniscus demersus) also known as the Black-footed Penguin is a species of penguin, confined to southern African waters. It is also widely known as the “Jackass” Penguin for its donkey-like bray, although several species of South American penguins produce the same sound. The African Penguin is found on the south-western coast of Africa, living in colonies on 24 islands between Namibia and Algoa Bay, near Port Elizabeth, South Africa. It is the only penguin species that breeds in Africa and its presence gave name to the Penguin Islands.

The Chinese Alligator (Alligator sinensis) is one of two known living species of Alligator, a genus in the family Alligatoridae. It is native only to eastern China. While it originally ranged through much of China, this species’ wild habitat has been reduced to little more than a few ponds containing 100 to 200 individuals along Lake Tai and the lower Yangtze River in the provinces of Jiangsu, Zhejiang, and Anhui. Its population reduction has been mostly due to conversion of its habitat to agricultural use. A majority of their usual wetland habitats have been turned into rice paddies. Poisoning of rats, which the alligators then eat, has also been blamed for their decline.

The Red-crowned Crane (Grus japonensis) is a large east Asian crane and among the rarest cranes in the world. In some parts of its range, it is known as a symbol of luck, longevity and fidelity. The estimated total population of the species is only 2,750 in the wild, including about 1,000 birds in the resident Japanese population. Of the migratory populations, about 1,000 winter in China (mainly at the Yellow River delta and Yancheng Coastal Wetlands), and the remaining winter in Korea. It is endangered and received this status on June 2, 1970.

The Leatherback Sea Turtle (Dermochelys coriacea) is the largest of all living turtles and is the fourth largest modern reptile behind three crocodilians. It can easily be differentiated from other modern sea turtles by its lack of a bony shell. Instead, its carapace is covered by skin and oily flesh. Populations in the Pacific Ocean are in far greater danger of extinction than the Atlantic due to commercial fishing, illegal poaching, pollution, and nesting beach destruction in the Pacific.