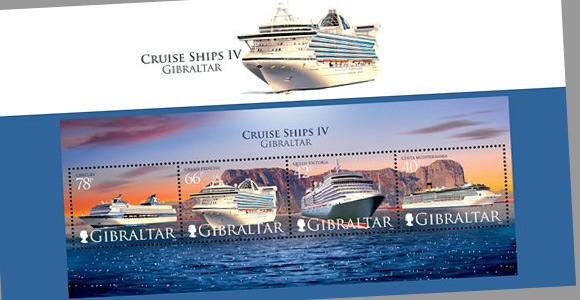 The issue features the ‘Queen Victoria’ (90,000 gross tons); the ‘Grand Princess’ (109,000 gross tons), the ‘Century’ (71,145 gross tons) and the ‘Costa Mediterranea’ (86,000 gross tons) all of which are callers to the Rock of Gibraltar during the year. It is truly a fantastic sight to view these magnificent ships coming in through the Strait of Gibraltar, early in the morning, with the sun rising off its back and the mountains of Africa in the background on a sharp, clear day.
The Queen Victoria is of the same basic design as other Vista class passenger vessels, though slightly longer and more in keeping with Cunard’s interior style. At 90,000 tons, she is the second largest Cunard ship ever built, after the RMS Queen Mary 2. Interestingly, she will not carry mail and thus will not receive Royal Mail Ship (RMS) status.
The Grand Princess is a large cruise ship owned by Princess Cruises. Built by Fincantieri Cantieri Navali Italiani in Monfalcone, Italy, at a cost of approximately US$450 million, she was the largest and most expensive ship ever built at the time, a distinction now carried by Royal Caribbean International’s Freedom of the Seas. Grand Princess primarily operates in Europe during the summer to early autumn, and then operates in the Caribbean during winter to late spring.
The Century is the lead ship of the Century Class of cruise ships for Celebrity Cruises, and the co-flagship of the Celebrity fleet, along with Millennium class ship Constellation. Century was launched in 1995 and went into a 5 week dry-dock in April 2006 whilst undergoing complete refurbishment. Designed to incorporate a variety of Celebrity’s most popular Millennium-class attributes, the revitalization of Century is the line’s most extensive refurbishment to-date, and the largest cruise ship modification completed by Fincantieri’s Palermo, Italy, shipyard.
The Costa Mediterranea is a Spirit class cruise ship operated by Costa Cruises. She was constructed at the Kvaerner Masa-Yards (currently Aker Finnyards) in Helsinki, Finland at a cost of over 400 million euros. Her design, like sister ship Costa Atlantica’s, was derived from Carnival Cruise Lines’ Spirit Class ships (Carnival Spirit, Carnival Pride, Carnival Legend and Carnival Miracle). On June 16 2003 she departed on her maiden voyage from Genoa to Spain and Portugal.