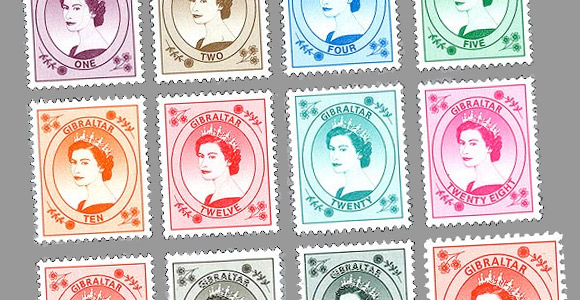 The 1999 Definitive series consisted of 15 values ranging from 1p to £3. They consist of simply a profile of Queen Elizabeth II and a denomination, always in a single colour so that it can be easily identified at the Post Office. An excellent classical set to add to your collection of stamps

HM Queen Elizabeth II, born April 21, 1926, is the eldest daughter of George VI and Elizabeth Bowes-Lyon. She married Philip Mountbatten, a distant cousin, in 1947 and had four children: Charles, Prince of Wales, Anne, Andrew and Edward.

HM Queen Elizabeth II is the best known monarch in the world and is the most widely travelled Head of State. Her ascension was accompanied by constitutional innovation; each independent, self~governing country proclaimed HM Queen Elizabeth II, Queen of their individual state. She approves of the transformation from Empire to Commonwealth, describing the change as a "beneficial and civilized metamorphosis." The indivisibility of the crown was formally abandoned by statute in 1953, and 'Head of the Commonwealth' was added to the long list of royal titles which she possesses.

HM Queen Elizabeth II's travels have won the adulation of her subjects; she is greeted with enthusiasm and warm regard with each visit abroad. During the 10th and lIth May 1954 she visited Gibraltar. Apart from attending the more formal functions she renamed one of Gibraltar's most important roads, Reclamation Road to Queensway, she reviewed the troops at North Front, met Gibraltar's school children at the Victoria Stadium, planted a tree in commemoration of her visit at Alameda Gardens and visited the historical sites in the Upper Rock Nature Reserve where she met our most famous residents, the Apes. HM Queen Elizabeth II has been the master link in a chain of unity forged among the various countries within the Commonwealth. Hence, the monarchy, as well as the Empire, has evolved - what once was the image of absolute power is now a symbol of fraternity. Long live the Queen!