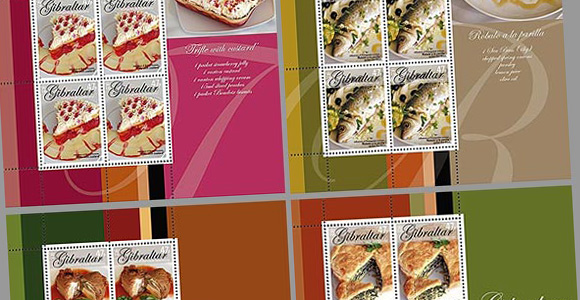 The theme for the 2005 Europa stamps eleced by Posteurop is Gastronomy.

Gastronomy reflects the diverse origins of a country through recipes passed down through
generations, as is especially the case in Gibraltar. While there is both Spanish and British influence, the ethnic origins of most Gibraltarian recipes are mainly Genoese (Italy), Maltese and Portuguese.
The ‘Torta de acelga’ - spinach pie from Genoa, Italy, is prepared with spinach, eggs, garlic,
cheese, olive oil, marjoram, chopped parsley and ‘puff’ pastry for the lining and the ‘cover’ we see in the image.
The ‘Robalo a la parilla’ recipe - grilled Sea-Bass comes from Portugal. The fish is prepared with chopped spring onions, parsley, lemon juice and olive oil. It is then grilled.
The ‘Rolitos de ternera’ - veal ‘birds’ from Malta is made with thinly cut veal, hard-boiled eggs and lean ham. The veal is rolled into a ball containing the egg and ham. It is normally served with peas and potatoes.
Lastly, we have the popular sweet ‘Sherry Trifle’ from Britain, made with strawberry jelly, custard, whipping cream, sliced peaches and ‘Boudoir’ biscuits soaked in Sherry cream.
These are but four examples of our local gastronomy.

Europa stamps have been issued annually since 1956. First sets representing the founding 6 members of the ECSC, European Coal and Steel Community, then by the European Conference of Postal and Telecommunications Administrations (CEPT) in 1959, (first stamps issued in 1960) and by PostEurop since 1993. Initially in 1956 a total of 13 stamps were issued with a common design from 6 different countries. A common theme of Peace and Welfare through agriculture and industry was used for 1957. The common design reappeared in 1958 and continued until 1973. From 1974 the designs reflect a common theme.

The common design idea replaced the common theme in 1984, which was the CEPT 25th Anniversary (1959-84) and shows a symbolic bridge, said to represent Liaison, Exchange and Communication. With the split of posts and telecoms providers in most countries, CEPT is no longer responsible, but the postal authorities under the guidance of PostEurop continue the Europa tradition. From 1993 all the stamps have "Europa" inserted into the design in small print. (Source Wikipedia)