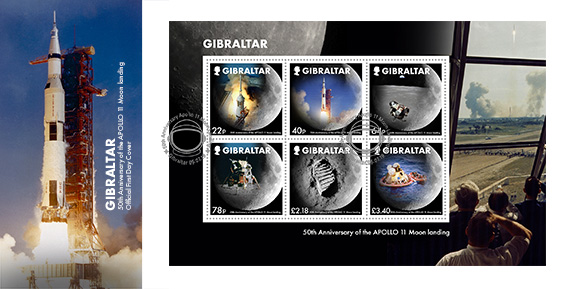 64p: A view of the Apollo 11 lunar module Eagle as it returned from the surface of the moon to dock with the command module Columbia. A smooth mare area is visible on the Moon below and a half-illuminated Earth hangs over the horizon. The lunar module ascent stage was about 4 meters across. Command module pilot Michael Collins took this picture just before docking at 21:34:00 UT (5:34 p.m. EDT) 21 July 1969. (Apollo 11, AS11-44-6642)

78p: Photograph of the Lunar Module at Tranquility Base.

£2.18: A close-up view of astronaut Buzz Aldrin’s boot print in the lunar soil, photographed with the 70mm lunar surface camera during Apollo 11’s sojourn on the moon.

£3.40: The Apollo 11 crew await pickup by a helicopter from the USS Hornet, prime recovery ship for the historic lunar landing mission. The fourth man in the life raft is a United States Navy underwater demolition team swimmer. All four men are wearing biological isolation garments.

Moon Landings 50th Ann
This issue is available as