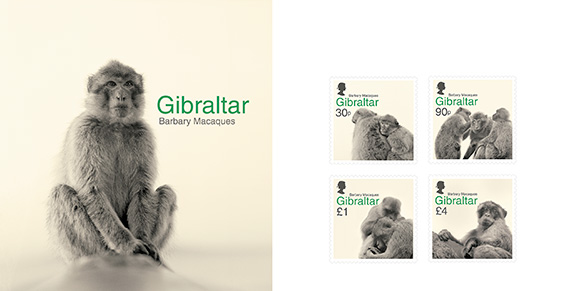 Arguably Gibraltar’s most famous tourist attraction, the Rock’s Barbary Macaques are so much more. Indeed Sawchuk & Tripp’s fitting tribute describes them as a living legacy and a perfect nuisance in their 2019 publication: a must for any enthusiast.

Although native to North Africa (Barbary Coast), Gibraltar’s macaques represent the only free-living, non-human primates in the European continent. Stocky in build and lacking a visible tail (they do have a vestigial one) the Barbary Macaque (Macaca Sylvanus) resembles more an ape. Whilst to this day there are some that colloquially refer to them as apes, they are in fact a species of Old World monkey. The extant 250-strong population owe their introduction and persistence on the Rock in no small part to human intervention, in particular the British Garrison, through replenishment of stocks and varying degrees of provisioning and protection.

The consensus among scholars and historians alike is that whilst it is plausible that macaques kept as pets by inhabitants may have escaped and bred in the Upper Rock resulting in intermittent small macaque populations, the first of numerous consignments of macaque from North Africa dates to 36 years after an Anglo-Saxon fleet led by Sir George Rooke captured the Rock in 1704. Governor Hargrave’s entry on one of the Governor’s books of 1740 documenting a large introduction of apes and ‘other game from Barbary’ is hugely significant.

What followed is a centuries-old human-monkey interface like no other that has captivated residents; military and civilians, as well as visitors, with also the wider international public being concerned for their wellbeing. Perhaps the most famous, certainly the most significant figure to show his concern towards the macaques was Prime Minister Winston Churchill who ordered the number of macaques to be restored to 24 in September 1944, such was the superstition surrounding the macaques’ continued existence and the Rock’s British sovereignty.

Officers in Charge of the ‘Apes’; roll calls; considered an institution and the Lions of Gibraltar - the association of the macaques with the military is undeniable. Post war Gibraltar however saw a rise in tourism during the fifties and sixties with the lure of the macaques taking centre stage. Indeed, merchants of the day had already paved the way for the macaques’ inevitable new role when they realised there was an easy return to be made from viewing the monkeys as early as the early 1900s.

With the welfare of the macaques being passed on from the military to the Gibraltar Government during the 1990s and the onset of large-scale tourism, tour operators now take millions of tourists each year to see the famous macaques. Bold and always on the lookout for an opportunity, one must not forget that the upper Rock was declared a Nature Reserve in 1993 and so the macaques should be viewed responsibly and with caution. For guidelines when viewing the macaques please turn to the Visit Gibraltar website, under “see and do”, “natural attractions”.

Endearing as they are, large scale macaque tourism is not without its drawbacks and the evidence suggests that unauthorised feeding and interacting with the macaques has devastating consequences to their social dynamics and equally as important, the way they behave in and around visitors. Let us not forget that throughout their history the macaques’ antics and roamings into urbanised areas has earned them the title of ‘nuisance’ by many affected locals. It is for this reason that we should view them responsibly and the pertinent authorities are calling for a better understanding of the macaques through education increased awareness campaigns.

Away from the busier tourist hotspots, Gibraltar’s macaques truly are captivating and for the avid nature lover there is perhaps no better way to learn about them than to attend a ‘Monkey Talk - Gibraltar’, Heritage Award-winning Macaque Educational Outing, where the macaques are observed non-intrusively as part of the natural wildlife instead of a tourist attraction. Here their natural behaviours, facial gestures and subtle body postures are interpreted as and when displayed. Visit their facebook page for details.

NEW Barbary Macaques
This issue is available as