Home -> The Bureau -> About Gibraltar Stamps 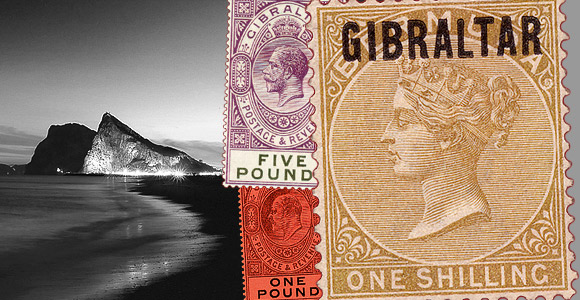 Early details of postal arrangements in Gibraltar are hard to establish although it is known that postal facilities were provided by the Civil Secretary’s Office from 1749. Gibraltar became a packet port in July 1806 (one year after the Battle of Trafalgar in 1805), although the Civil Secretary’s office continued to be responsible for other mail. The two services were amalgamated on 1st January 1857 as a Branch Office of the British Post Office with the control of the Gibraltar Post Office not reverting to Gibraltar until the 1st January 1886.

Spanish stamps could be used in Gibraltar from their introduction in 1850 and indeed such franking was required on letters weighing over ½ oz. sent to Spain after 1 July 1854. From 1 July 1856 until 1 January 1876 all mail to Spain required postage to be prepaid by Spanish stamps and there issues were supplied by the Gibraltar Postal Authority acting as a Spanish Postal Agent. The mail forwarded under this system was cancelled at San Roque with a horizontal barred oval, later replaced with by a cartwheel postmark showing numeral 63. From 1857 combination envelopes showing the 2d ship mail fee paid in British stamps and the inland postage by Spanish issues exist.

Stamps of Great Britain were issued for use in Gibraltar from 3 September 1857 to the end of 1885. The initial supply contained 1d, 4d and 6d values.

Finally on the 1st January 1886 the Colonial Government of Gibraltar assumed control of its Postal Services. As an interim measure, Bermuda stamp plates were overprinted with 'Gibraltar' using different colours. These were replaced by Gibraltar's own design in December of that same year.

Gibraltar's stamps were used with peseta values from 1889 to 1898 since trade was carried out in this currency. Stamp designs were rather stereotyped until 1931 when, at the Governor's request, Captain Garrood, Gibraltar's Crown Surveyor and Engineer, produced the first pictorial Definitive.

The first commemorative issue was in 1935. The release of such issues were confined up to 1966 to Crown Agents 'Omnibus' issues and marked events of international interest. Since 1966 subjects of a predominantly local flavour have been chosen through international events are also featured.

Gibraltar Stamps have therefore been issued during five different reigns as follows:

All the stamps issued during those reigns may be viewed on this website in our ‘Stamp Legacy’ section. Today Gibraltar continues to adopt a conservative stamp issuing policy thus maintaining its high reputation amongst the philatelic fraternity. Gibraltar stamps are highly collected worldwide and the Gibraltar Philatelic Bureau proudly despatched its stamps to collectors in over 60 countries worldwide from their offices.