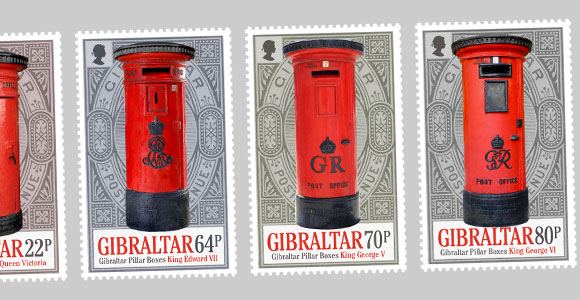 The Royal Gibraltar Post Office has been operating for over 150 years with Gibraltar’s first stamp being issued in 1886. There are pillar boxes located all over Gibraltar and the stamps depict a pillar box from each reign: Queen Victoria, King Edward VII, King George V, King George VI & Queen Elizabeth II.

A pillar box is a type of free-standing post box. They are found in the United Kingdom and in most former nations of the British Empire, members of the Commonwealth of Nations and British overseas territories, such as Australia, Cyprus, India, Gibraltar, Hong Kong, the Republic of Ireland, Malta, New Zealand and Sri Lanka. Pillar boxes were provided in territories administered by the United Kingdom, such as Mandatory Palestine, and territories with Agency postal services provided by the British Post Office such as Bahrain, Dubai, Kuwait and Morocco. The United Kingdom also exported pillar boxes to countries that ran their own postal services, such as Argentina, Portugal and Uruguay.

Mail is deposited in pillar boxes to be collected by the Royal Mail, An Post or the appropriate postal operator and forwarded to the addressee. The boxes have been in use since 1852, just twelve years after the introduction of the first adhesive postage stamps (Penny Black) and uniform penny post.

Mail may also be deposited in lamp boxes or wall boxes that serve the same purpose as pillar boxes but are attached to a post or set into a wall. According to the Letter Box Study Group, there are more than 150 recognised designs and varieties of pillar boxes and wall boxes, not all of which have known surviving examples. The red post box is regarded as a British cultural icon.