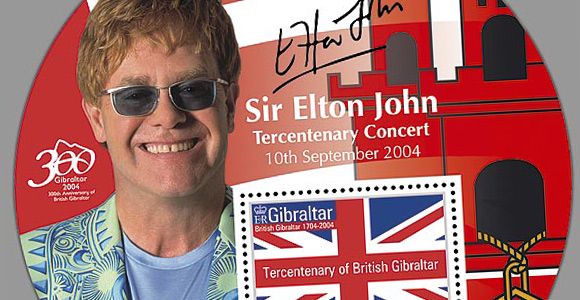 The Tercentenary of British Gibraltar Elton John concert on the 10th September 2004 is undoutably one of the highlights of the Tercentenary celebrations calendar. With the majestic north face of the Rock as a backdrop, Sir Elton John will be performing on what is also Gibraltar’s National Day, at the Victoria Stadium.

The Gibraltar Philatelic Bureau have chosen to commemorate the occasion with a round Miniature Sheet featuring the £1.20 UK flag stamp also featured in the successful ‘Tercentenary’ miniature sheet released in April. Sir Elton, Gibraltar salutes you.