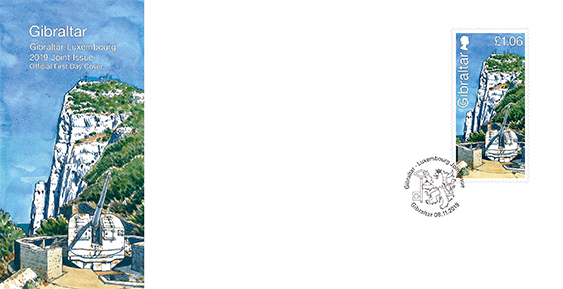 The Gibraltar – Luxembourg 2019 Joint stamp issue shares the common topic “Defensive tunnels”. The Gibraltar stamp features an external view of the Rock’s Great Siege tunnels as seen from Princess Anne’s Battery. The illustration featured on the stamp was created by a well-known sketch artist and architect residing in Luxembourg, Mr Arnaud De Meyer. Luxembourg’s stamp features an external view of the Bock Casemates tunnels which forms part of the “Gibraltar of the North” fortifications in Luxembourg and has also been illustrated by Mr De Meyer.

Great Siege Tunnels, Gibraltar - The Great Siege of Gibraltar was an attempt by France and Spain to capture Gibraltar from Great Britain during the American Revolutionary War. Lasting from July 1779 to February 1783, it was the fourteenthand final siege of Gibraltar. During the siege, British and Spanish forces faced each other across an approximately 1 kilometre (0.62 mi) wide stretch of the marshy open ground that forms the isthmus immediately to the north of the Rock of Gibraltar. The British lines blocked access to the City and the western side of the Rock, while the eastern side of the Rock was inaccessible because of its steep terrain. Gun batteries were placed in a series of galleries on the north face of theRock, providing overlapping fields of fire so that infantry attacks would come under heavy fire throughout their advance. The impetus for the construction of the tunnels came from the garrison’s need to cover a blind angle on the north-east side of the Rock. The only solution found to cover that angle was via a gun mounted on a spur of rock known as The Notch. There was no possibility of building a path there due to the vertical cliff face, so Sergeant-Major Henry Ince of the MilitaryArtificers suggested digging a tunnel to reach it. His plan was approved and construction work began on 25 May 1782.

Bock Casemates Luxembourg - In 963, Count Siegfried built a fortified castle on the Bock promontory, which was soon to become the cradle of the city. In the course of the centuries, on the western side, mighty ring walls were added, which, however, did not foil the Burgundians in their attempt to conquer the city in 1443. The best builder-engineers of the new masters (the Burgundians, the Spaniards, the French, the Austrians and the German Confederation) eventually turned the city into one of the most powerful emplacements in the world, the “Gibraltar of the North”. Its defences were bolstered by three fortified rings with 24 forts, 16 other strong defensive works and a unique 23 km long network of casemates: thesecould not only shelter thousands of soldiers and their horses, but also housed workshops, kitchens, bakeries, slaughter- houses etc. In 1867, after the declaration of neutrality,the military withdrew from the fortress and during the following 16 years 90% of the defences were demolished. In 1875, the superstructure of the Bock, a tremendous construction, was razed. However, it proved to be impossible to blow up the casemates, without also demolishing part of the city, so the entrances and the key connecting galleries were sealed. In spite of this, 17 kilometres of tunnels remain, often on different levels and tremendous stairways penetrate up to 40 metres inside the rock face.

Gibraltar - Luxembourg Joint Issue
This issue is available as