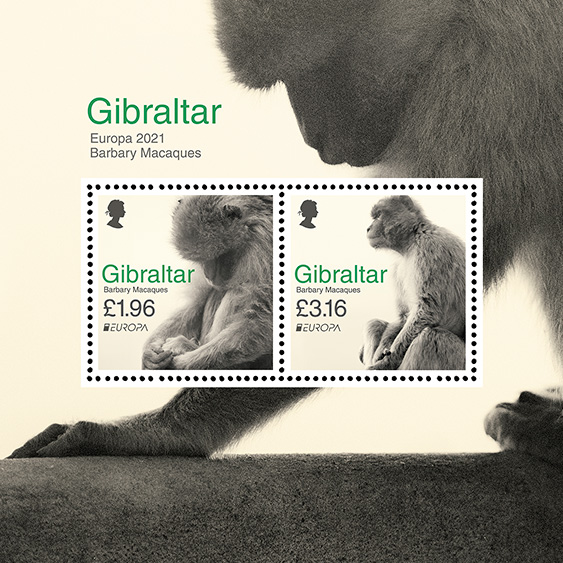 EUROPA stamps are special stamps issued by European postal administrations. They bear the official EUROPA logo, a PostEurop registered trademark under the aegis of PostEurop in which Europe is the central theme. EUROPA stamp issues are among the most collected and most popular stamps in the world and have been issued for over 60 years. Every year a new theme is assigned by PostEurop and all participating countries issue stamps with their own interpretation of the theme. The theme for 2021 is ‘Endangered National Wildlife’. Our stamps feature the Barbary Macaques, classified as endangered by the IUCN. The Macaques are Gibraltar’s most popular tourist attraction and the only wild monkey population found in Europe.

Perhaps Gibraltar’s most important tourist attraction, the Barbary Macaques are normally found in North Africa, but their presence in Gibraltar probably dates from the early days of the British garrison when it is presumed that they were imported, inevitably finding the rough limestone cliffs and scrub vegetation a congenial habitat. In fact, many legends have grown up around them. One is that they travelled from their native Morocco via a subterranean tunnel starting at St Michael’s Cave leading down underneath the Strait of Gibraltar.

Another legend claims that, should the macaques ever disappear, the British will leave Gibraltar. During the last war, natural causes had diminished the macaque numbers alarmingly. Fortunately, Sir Winston Churchill took a personal interest and additional animals were imported from Morocco. Today, in addition to the pack resident at Apes’ Den, there are other packs living wild on the steep slopes of the Rock. Gibraltar does not wish to lessen ‘the monkey experience’ but experts have warned that too much human interaction is harmful to these wild animals.

Primarily because we want them to remain living as they are, in a semiwild state, we strongly advise you not to get too close, feed or touch them. Finally, because they are wild animals, they may react violently and have been known to attack and inflict serious bites. By all means take photographs but please allow the monkeys to live a natural, free life for their benefit and the enjoyment of all. Just keep a safe distance, do not shout or make sudden movements.

Today at least 20 different macaque species are known and the macaque genus is characterised by its diversity. One example is the tail: while in the Barbary macaque, the tail is almost not existent, the long-tailed macaque from Indonesia has a tail longer than its body. Between these extremes, all intermediate stages can be found. They have also developed diverse ecological adaptations. Macaques are found in more climates and habitats than any other primate except humans. The geographical distribution ranges from as far east and north as Japan to as far west as Morocco. But the Barbary macaque is the only one to occur in Africa; all other macaques are found in Asia. Furthermore, the Barbary macaques on Gibraltar are the only free-ranging monkeys in Europe.

Europa 2021 - Barbary Macaques II
This issue is available as