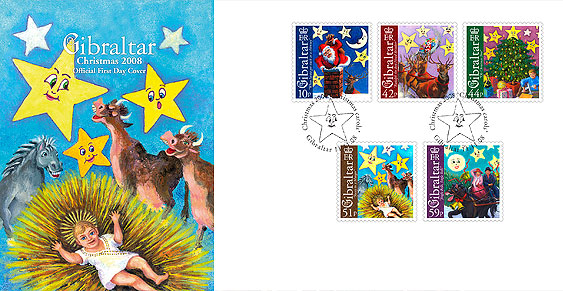 This year’s Gibraltar Christmas stamps celebrate the wonderful carols sung by our children before and during Christmas both at school and at home.
The tradition of Christmas carols hails back as far as the 19th century, although carols were originally communal songs sung during celebrations like harvest tide as well as Christmas. It was only later that carols began to be sung in church, and to be specifically associated with Christmas.
Carols suffered a decline in popularity after the Reformation in the countries where Protestant churches gained prominence but survived in rural communities until the revival of interest in carols in the 19th century. The first appearance in print of “God Rest Ye Merry, Gentlemen”, “The First Noel”, “I Saw Three Ships” and “Hark the Herald Angels Sing” was in Christmas Carols Ancient and Modern (1833) by William B. Sandys. Composers like Arthur Sullivan helped to repopularize the carol, and it is this period that gave rise to such favorites as “Good King Wenceslas” and “It Came Upon the Midnight Clear”, a New England carol written by Edmund H. Sears and Richard S. Willis.
Today carols are regularly sung at Christian religious services . Some compositions have words which are clearly not of a religious theme, but are often still referred to as “carols”. For example, the sixteenth century song “A Bone, God Wot!” appears to be a wassailing song (which is sung during drinking or while requesting ale), but is described in the British Museum’s Cottonian Collection as a Christmas carol. Though many Christmas carols were written prior to the 20th century, several modern compositions have been written in more recent times.
The stamps depict our interpretation of the lyrics of our own kids’ favourite carols: ‘When Santa got stuck a chimney’ depicting Santa unable to move as the chimney is too narrow for him!; ‘Rudolph the red-nosed reindeer’ depicting Rudolph, lead reindeer, pulling on Santa’s sleigh overlooked by the friendly stars; ‘Oh Christmas tree’ featuring a child opening up presents under the tree; ‘Away in a manger’ depicting Jesus in the manger and ‘Jingle Bells’ depicting the one-horse open sleigh...hey!

Christmas 2008
This issue is available as