250th Anniversary of the Birth of Nelson 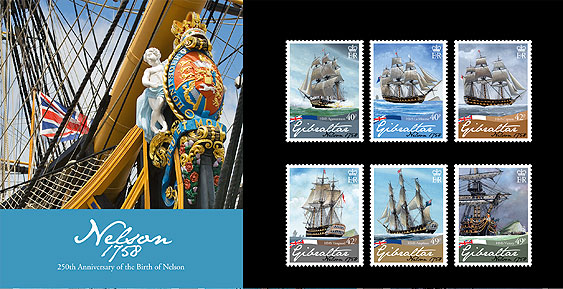 250th Anniversary of the Birth of Nelson (view technical specs)

Gibraltar celebrates the 250th anniversary of the birth of Horatio Nelson with an issue of 6 stamps, a miniature sheet, 6 sheetlets and the flagship limited edition (1,000 copies) special folder containing the complete set.
Horatio Nelson was born on 29 September 1758 in a rectory in Burnham Thorpe, Norfolk, England, the sixth of eleven children of the Reverend
Edmund Nelson and Catherine Nelson. His mother, who died when he was nine, was a grandniece of Sir Robert Walpole, 1st Earl of Oxford, the de facto first prime minister of the British Parliament. It was at Beccles church, Suffolk in 1749 that Catherine Suckling from the nearby
village of Barsham, Suffolk married the Reverend Edmund Nelson.