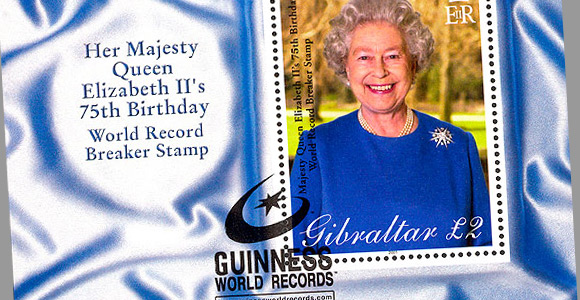 In April 2001 Gibraltar achieved a Guinness World Record by issuing the fastest stamp in history. A photograph of HM Queen Elizabeth II was taken that morning at Buckingham Palace for the Gibraltar stamps,. The photo was emailed immediately to the Bureau’s office in Gibraltar where the sheet was designed by Stephen Perera and then sent to the printers who commenced printing at 10.00am that same day. At midday, a representative of the Crown Agents flew to Gibraltar with the printed stamps and the stamps were put on sale that same afternoon (exactly 624 minutes after the photograph was taken.) The media published the story as follows; “Gibraltar gives a World Record to HM Queen Elizabeth II for Her Birthday!