Extension to the European Union 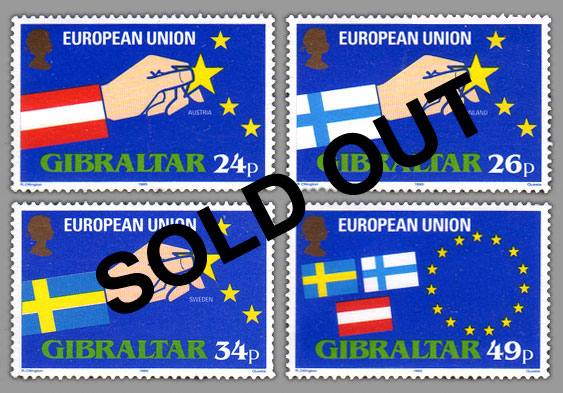 As set of four stamps to commemorate the enlargement of the EU was issued. The new member countries were Austria, Finland and Sweden. The fourth stamp features the flags of the new countries plus the EU emblem.

1945 - 1959: The European Union is set up with the aim of ending the frequent and bloody wars between neighbours, which culminated in the Second World War. As of 1950, the European Coal and Steel Community begins to unite European countries economically and politically in order to secure lasting peace. The six founders are Belgium, France, Germany, Italy, Luxembourg and the Netherlands. The 1950s are dominated by a cold war between east and west. Protests in Hungary against the Communist regime are put down by Soviet tanks in 1956; while the following year, 1957, the Soviet Union takes the lead in the space race, when it launches the first man-made space satellite, Sputnik 1. Also in 1957, the Treaty of Rome creates the European Economic Community (EEC), or ‘Common Market’.

1970-1979: Denmark, Ireland and the United Kingdom join the European Union on 1 January 1973, raising the number of member states to nine. The short, yet brutal, Arab-Israeli war of October 1973 result in an energy crisis and economic problems in Europe. The last right-wing dictatorships in Europe come to an end with the overthrow of the Salazar regime in Portugal in 1974 and the death of General Franco of Spain in 1975. The EU regional policy starts to transfer huge sums to create jobs and infrastructure in poorer areas. The European Parliament increases its influence in EU affairs and in 1979 all citizens can, for the first time, elect their members directly.

1980-1989: The Polish trade union, Solidarność, and its leader Lech Walesa, become household names across Europe and the world following the Gdansk shipyard strikes in the summer of 1980. In 1981, Greece becomes the 10th member of the EU and Spain and Portugal follow five years later. In 1987 the Single European Act is signed. This is a treaty which provides the basis for a vast six-year programme aimed at sorting out the problems with the free-flow of trade across EU borders and thus creates the ‘Single Market’. There is major political upheaval when, on 9 November 1989, the Berlin Wall is pulled down and the border between East and West Germany is opened for the first time in 28 years, this leads to the reunification of Germany when both East and West Germany are united in October 1990.

1990-1999: With the collapse of communism across central and eastern Europe, Europeans become closer neighbours. In 1993 the Single Market is completed with the the 'four freedoms' of: movement of goods, services, people and money. The 1990s is also the decade of two treaties, the ‘Maastricht’ Treaty on European Union in 1993 and the Treaty of Amsterdam in 1999. People are concerned about how to protect the environment and also how Europeans can act together when it comes to security and defence matters. In 1995 the EU gains three more new members, Austria, Finland and Sweden. A small village in Luxembourg gives its name to the ‘Schengen’ agreements that gradually allow people to travel without having their passports checked at the borders. Millions of young people study in other countries with EU support. Communication is made easier as more and more people start using mobile phones and the internet.

2000-Present: The euro is the new currency for many Europeans. 11 September 2001 becomes synonymous with the 'War on Terror' after hijacked airliners are flown into buildings in New York and Washington. EU countries begin to work much more closely together to fight crime. The political divisions between east and west Europe are finally declared healed when no fewer than 10 new countries join the EU in 2004. Many people think that it is time for Europe to have a constitution but what sort of constitution is by no means easy to agree, so the debate on the future of Europe rages on.