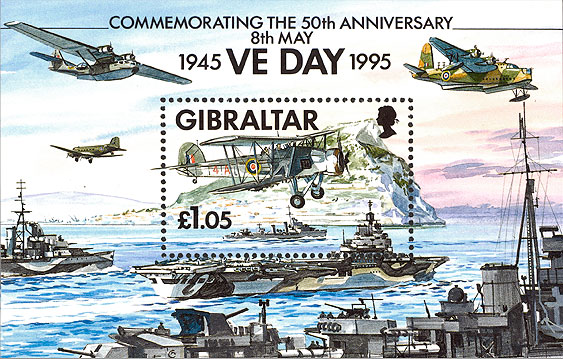 Victory in Europe Day (V-E Day or VE Day) was on May 8, 1945, the date when the WWII ALLIES formally accepted the unconditional surrender of the armed forces of Nazi Germany and the end of  Hitler's third reich. The formal surrender of the occupying German forces in the Channel Islands was not until May 9, 1945. On 30 April Hitler committed suicide during the Battle of Britain, and so the surrender of Germany was authorized by his replacement, President of Germany Karl Donitz. The administration headed up by Dönitz was known as the Flensburg Government. The act of military surrender was signed on 7 May in Reims, France, and ratified on 8 May in Berlin, Germany.

In the UK more than one million people celebrated in the streets to mark the end of the European part of the war. Many hardships remained, however, including continued rationing of food and clothing, which lasted even longer in peacetime than it had during the war