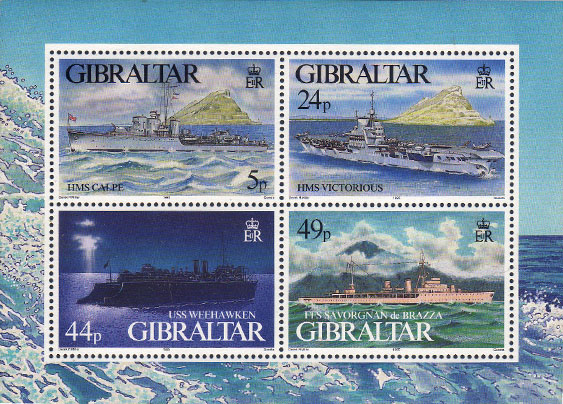 The third Miniature sheet in the series (1993-1997) of stamps featuring warships that have visited Gibraltar include HMS Calpe (named in honour of Gibraltar); the aircraft carrier HMS Victorious; USS Weehawken and FFS Savorgnan de Brazza

HMS Calpe was a hunt class type II destroyer launched in 1941. She was transferred to the Royal Danish Navy in 1952 as the Rolfe Krake, and was sold for scrapping in 1966

FFS Savorgnan de Brazza was a French Navy ship built in 1940 in time for WWII. It was very used during WWII and was eventually decommisioned in 1957

The fourth Victorious R38 was an Illustrious class fleet aircraft carrier, launched in 1939. She saw much action in WWII. She was scrapped in 1969

USS Weehawken  a large harbor tug used during WWII, laid down in August 1964 at Winsconsin