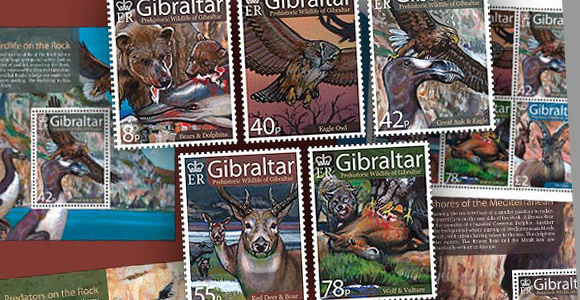 The excavations that the Gibraltar Museum has been conducting in Gorham’s and Vanguard Caves since 1991 have revealed the richness of the flora and fauna of Gibraltar in prehistory. These caves hold a unique fossil, pollen and charcoal record of the last 120 thousand years on the Rock and its surroundings. For 90% of the time global climate was cooler than today and sea levels were lower by as much as 120 metres. A large sandy plain, with lakes and savannahs, surrounded the Rock. This was the time of the Neanderthals who brought back animals to the caves for food. The information obtained from these caves allows us a unique vision into Gibraltar’s prehistory and its animals and plants. The set of six images depicts Gibraltar’s prehistoric landscapes, at times of lowered sea level and also during periods of global warming when the sea reached up to 8 metres above present levels, making the Rock an island. Most of the species in the fossil record still exist but many are restricted to reserves in Africa or the more remote parts of Europe. Others are now extinct. The particular climatic conditions of Gibraltar meant that, even in the coldest moments when Europe was engulfed in ice, many species survived in this refugium. Olives grew and tortoises lived here at the height of the last Ice Age showing that the climate was mild. Animals of the Ice Age, like Woolly Mammoth, never reached this far south either. The Neanderthals themselves lasted here much longer than anywhere else on the planet. This set gives an impression of the ecology and landscape of this Eden in the Mediterranean.