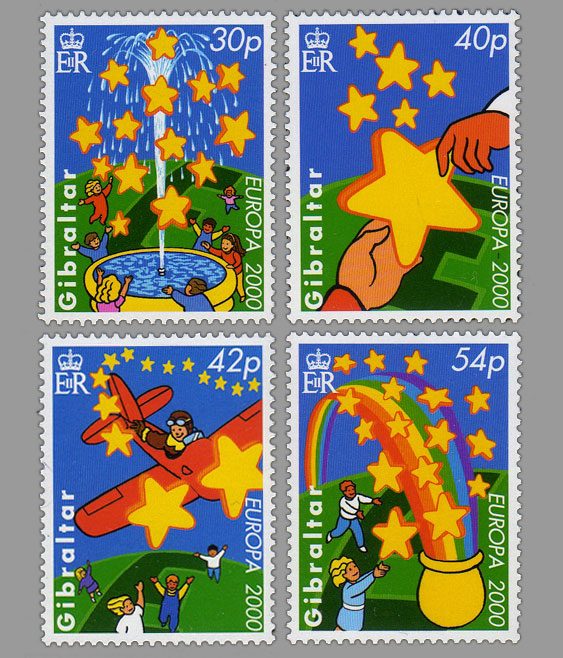 Set of stamps celebrating the European Union as represented by the stars on the flag which themselves represent the member countries.

Europa stamps have been issued annually since 1956. First sets representing the founding 6 members of the ECSC, European Coal and Steel Community, then by the European Conference of Postal and Telecommunications Administrations (CEPT) in 1959, (first stamps issued in 1960) and by PostEurop since 1993. Initially in 1956 a total of 13 stamps were issued with a common design from 6 different countries. A common theme of Peace and Welfare through agriculture and industry was used for 1957. The common design reappeared in 1958 and continued until 1973. From 1974 the designs reflect a common theme. The common design idea replaced the common theme in 1984, which was the CEPT 25th Anniversary (1959-84) and shows a symbolic bridge, said to represent Liaison, Exchange and Communication. With the split of posts and telecoms providers in most countries, CEPT is no longer responsible, but the postal authorities under the guidance of PostEurop continue the Europa tradition. From 1993 all the stamps have "Europa" inserted into the design in small print. For the new millennium in 2000, the common design once more replaced the common theme.

The stamp design for 2000 clearly shows a column of 6 stars representing the original 6 members of the ECSC. 4 Children,(of different heritage) represent Europe's future and are adding to the Vertical Star Column with the background depicting the GREEN letter E meaning a fertile Europe. CEPT is from the French acronym Conférence Européenne des administrations des Postes et des Télécommunications (wikipedia)