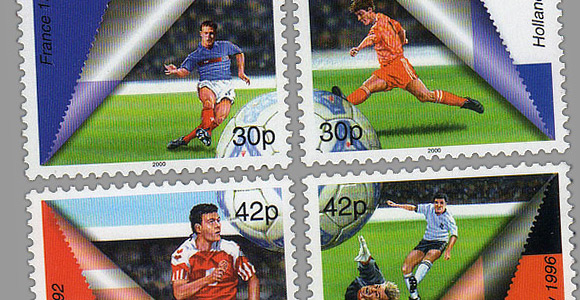 Set of stamps and Miniature Sheet honouring Europe's best footballing nations such as France, Holland, Germany, Denmark and England. The Miniature Sheet depicts the strips of winners since 1960 on the border

The finals of Euro 2000 were co-hosted (the first time this happened) by Belgium and the Netherlands between 10 June and 2 July 2000. Spain and Austria also bid to host the event.[1] The final tournament was contested by 16 nations. With the exception of the national teams of the hosts, Belgium and the Netherlands, the finalists had to go through a qualifying round to reach the final stage. France won the tournament, by defeating Italy 2-1 in the final, via a golden goal.