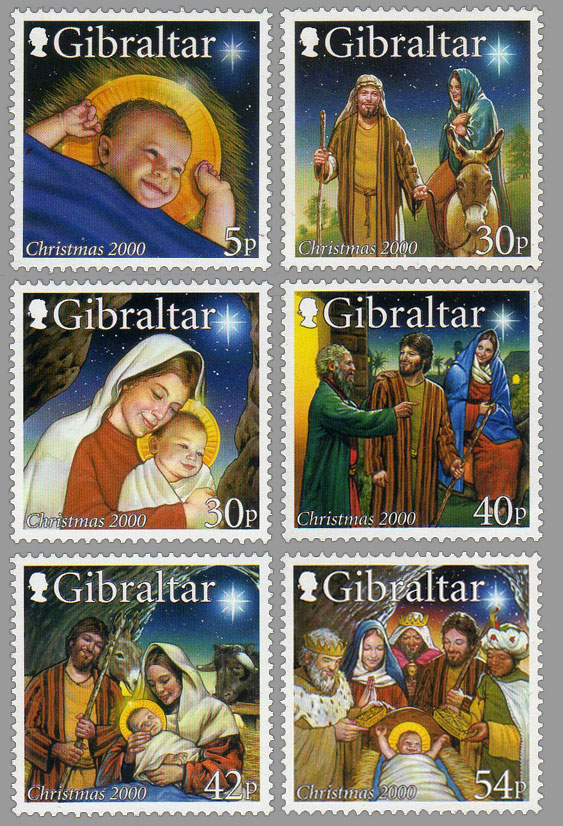 Christmas stamps depicting the birth of Christ. The stamps trace the steps of Mary and Joseph as they travel on a donkey to Bethlehem where an inn-keeper offers them a place to stay in the stable.

This years Christmas is mainly of a religious theme

Christmas or Christmas Day is a holiday observed mostly on December 25 to commemorate the birth of Jesus, the central figure of Christianity The date is not known to be the actual birth date of Jesus, and may have initially been chosen to correspond with either the day exactly nine months after some early Christians believed Jesus had been conceived, the date of the winter solstice on the ancient Roman calendar, or one of various ancient winter festivals. Christmas is central to the Christmas and holiday season, and in Christianity marks the beginning of the larger season of Christmastide, which lasts twelve days.

Although nominally a Christian holiday, Christmas is also widely celebrated by many non-Christians,and many of its popular celebratory customs have pre-Christian or secular themes and origins. Popular modern customs of the holiday include gift-giving, music, an exchange of greeting cards, church celebrations, a special meal, and the display of various decorations; including Christmas trees, lights, garlands, mistletoe, nativity scenes, and holly. In addition, Father Christmas (or Santa Claus) is a popular folklore figure in many countries, associated with the bringing of gifts for children