800th Ann of the Magna Carta 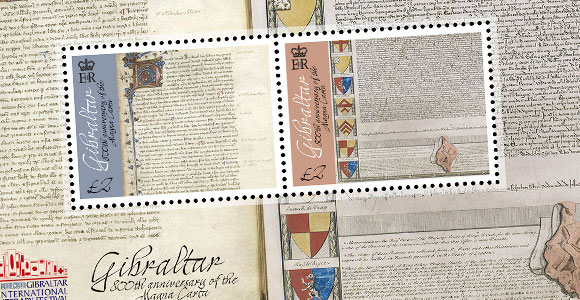 Magna Carta (Latin for “the Great Charter”), also called Magna Carta Libertatum (Latin for “the Great Charter of the Liberties”), is a charter agreed by King John of England at Runnymede, near Windsor, on 15 June 1215. First drafted by the Archbishop of Canterbury to make peace between the unpopular King and a group of rebel barons, it promised the protection of church rights, protection for the barons from illegal imprisonment, access to swift justice, and limitations on feudal payments to the Crown, to be implemented through a council of 25 barons. Neither side stood behind their commitments, and the charter was annulled by Pope Innocent III, leading to the First Barons’ War. After John’s death, the regency government of his young son, Henry III, reissued the document in 1216, stripped of some of its more radical content, in an unsuccessful bid to build political support for their cause. At the end of the war in 1217, it formed part of the peace treaty agreed at Lambeth, where the document acquired the name Magna Carta, to distinguish it from the smaller Charter of the Forest which was issued at the same time. Short of funds, Henry reissued the charter again in 1225 in exchange for a grant of new taxes; his son, Edward I, repeated the exercise in 1297, this time confirming it as part of England’s statute law.

The charter became part of English political life and was typically renewed by each monarch in turn, although as time went by and the fledgling English Parliament passed new laws, it lost some of its practical significance. At the end of the 16th century there was an upsurge in interest in Magna Carta. Lawyers and historians at the time believed that there was an ancient English constitution, going back to the days of the Anglo-Saxons, that protected individual English freedoms. They argued that the Norman invasion of 1066 had overthrown these rights, and that Magna Carta had been a popular attempt to restore them, making the charter an essential foundation for the contemporary powers of Parliament and legal principles such as habeas corpus. Although this historical account was badly flawed, jurists such as Sir Edward Coke used Magna Carta extensively in the early 17th century, arguing against the divine right of kings propounded by the Stuart monarchs. Both James I and his son Charles I attempted to suppress the discussion of Magna Carta, until the issue was curtailed by the English Civil War of the 1640s and the execution of Charles.

The political myth of Magna Carta and its protection of ancient personal liberties persisted after the Glorious Revolution of 1688 until well into the 19th century. It influenced the early American colonists in the Thirteen Colonies and the formation of the American Constitution in 1787, which became the supreme law of the land in the new republic of the United States. Research by Victorian historians showed that the original 1215 charter had concerned the medieval relationship between the monarch and the barons, rather than the rights of ordinary people, but the charter remained a powerful, iconic document, even after almost all of its content was repealed from the statute books in the 19th and 20th centuries. Magna Carta still forms an important symbol of liberty today, often cited by politicians and campaigners, and is held in great respect by the British and American legal communities, Lord Denning describing it as “the greatest constitutional document of all times – the foundation of the freedom of the individual against the arbitrary authority of the despot”.

In the 21st century, four exemplifications of the original 1215 charter remain in existence, held by the British Library and the cathedrals of Lincoln and Salisbury. There are also a handful of the subsequent charters in public and private ownership, including copies of the 1297 charter in both the United States and Australia. The original charters were written on parchment sheets using quill pens, in heavily abbreviated medieval Latin, which was the convention for legal documents at that time. Each was sealed with the royal great seal (made of beeswax and resin sealing wax): very few of the seals have survived. Although scholars refer to the 63 numbered “clauses” of Magna Carta, this is a modern system of numbering, introduced by Sir William Blackstone in 1759; the original charter formed a single, long unbroken text. The four original 1215 charters were displayed together at the British Library for one day, 3 February 2015, to mark the 800th anniversary of Magna Carta.

800th Ann of the Magna Carta
Also available as